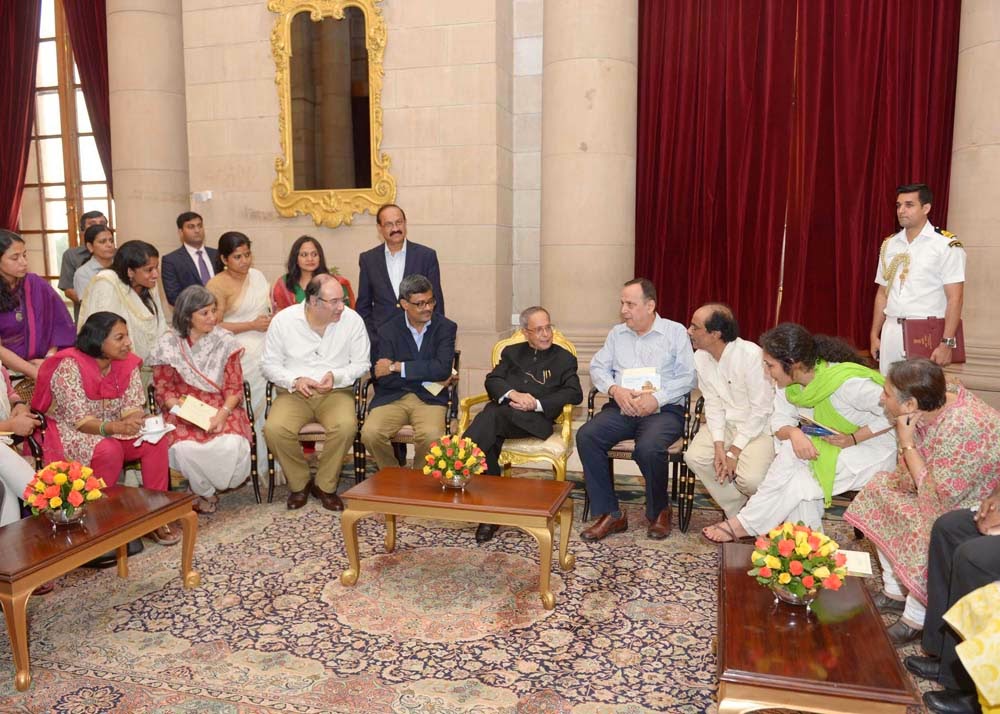 Email ThisBlogThis!Share to TwitterShare to FacebookShare to Pinterest
Labels: News

The Shiv Sena election symbol of bow-and-arrow hints that it is unrelenting in shooting its target, which has shifted over the decades--from Bombay"s (Mumbai) entrepreneurial South Indians to migrant workers from Bihar and Uttar Pradesh. The "arrow" also unfailingly aimed at Muslims, the supposed common enemy that endeared it to the BJP as far back as the 1990"s, their alliance having tasted power in the rich state of Maharashtra. Shiv Sena is a regional chauvinist party, which does not square with BJP"s pan-India aspirations. But they share a fondness for non-Islamic or pre-Islamic India"s supposedly glorious past, and that has bonded them closely enough in the past twenty years.
Read more »

It was not yet 9 pm that Radha (name changed) had finished her shift at an office in Central Delhi. Rather than waiting for the office car at its scheduled departure time, 9:30 pm, she decided to hop into the auto-rickshaw waiting just outside office and go to her parents' house in South Delhi. It was after the auto had gone past the well-lit Ashoka Hotel area to go through the deserted central road of Chanakyapuri, the enclave of foreign embassies that fall silent at night. It soon became clear to Radha that a motorbike was following the auto, and the auto-driver was suspiciously unconcerned about someone tailing him. Her apprehension became a reality when the bike got close and two riders, their faces covered, targeted her bag. It contained, apart from a fancy smartphone she had bought with her savings, a few thousand rupees that she'd withdrawn in the late afternoon from an ATM near her office.
Read more »


It is undeniable that the UPA had set out on a course correction in its final year in office, in a belated attempt to clean up the fiscal mess resulting from a decade of populist politics. It is no secret that something went wrong between the real Congress high command and Finance Minister P Chidambaram as he tried to put an end to the dole regime. But it would be wrong to say that NDA Finance Minister Arun Jaitley has picked up the thread from there. He has given directional statement for the nine remaining months of the financial year a clear roadmap of the neo-liberal reforms that Narendra Modi had etched out in his election campaign before being elected Prime Minister. Financial journalist and week-end economist Swaminathan S. Aiyar described Jaitley's budget as a Chidambaram budget "with saffron lipstick". Apart from the tackiness of the barb, it showed the pettiness of Lutyen's intellectuals that prevents them from accepting reforms from a government not up to their taste even though they swear by reforms themselves.
Read more »

As India's Finance Minister Arun Jaitley is set to present his maiden Budget on July 10, Prime Minister Narendra Modi's voters and opponents are waiting with a baiting breath. The past one month has been Jaitley's most difficult period of his life and tension is visible on his face. It's a historic day not only his political journey spanning 40 years culminating in emergence as Modi's virtual number two man. So spectacular has been Jaitley's rise in the Modi government that he has more enemies within his own party than outside. He not only hold charge of Defence and Corporate Affairs ministries. But half a dozen ministers handling economic ministries report to him. Yet, a walk in the Lodhi Gardens is a thing of the past for him and one could hardly find him smiling. His situation is of a producer whose mega-budget film is ready for release and he doesn't know how 125 crores Indians will take it. Major financial Capitals of the world are also looking for the 90-minute documentary, produced by Arun Jaitley and directed by Modi, to be presented in the Lok Sabha on Thursday noon.

The hike in rail fares, petrol, diesel and sugar prices may have dampened the spirit of the Indian "middle class". But the hopes for "achchhe din" are alive and kicking. So intense is the faith of the people in Modi that his call asking countrymen to get ready for the "bitter pill" was also drowned in the sea in Goa. There is no stopping of the Nifty & Sensex touching one peak after the other and FIIs pumping million of dollars in the Indian share market. The Chinese are waiting with their $500 billion investment plan and so are the Japanese. The SAARC as a whole is being marketed by Modi as one unit and Union Budget has to reflect this Modi vision.

Jaitley is also flooded with a huge 'wish list' pouring in from all over in his out-of-bounds North Block office. If corporate houses want re-scheduling of Non-Performing Assets (NPAs) worth Rs 3 lakh crores and waiver of interest & penalties, PSU banks want huge Capital infusion. Plus, they want written directions from the government before re-casting these loans for fear of the CBI. The subsidies and "mindless populist schemes costing another 5.25 lakh cores per annum is giving sleepless nights to Jaitley who even otherwise sleeps for four hours only these days. The all-around demand for meager 10 per cent cut in subsidies under the given circumstances will be a miracle. The El Nino continues to be the biggest threat to the Modinomics and put Jaitley in a tight spot. The rising prices of essential commodities due to supply side issues continues to be a worrying factor and no amount of long term steps will help the "Achchhe dinon ki Modi Sarkar" during this short-term crisis. Plus, Jaitley also has to ensure that his Budget doesn't hurt the prospects of BJP in Maharashtra, Haryana, Jharkhand and elsewhere going to polls in mid-October-November.

The power, coal and mining sector is clamouring for relief and Air India is demanding Rs 8200 crore revival package again. The Railways want Budgetary support of Rs 25000 crores as Minister Sadanand Gowda "hamesha anand mein rahatein hein." (The Railway Minister is always enjoying whatever may be happening, Modi said in Uri). Jaitley's predecessor P Chidambaram had done some jugglery in Budget proposals last year to the tune of Rs 45000 crores. He got the banks to deposit Rs 20,000 crores as TDS in advance which was actually payable only after March 31, 2014. The shortfall in the revenue earning of Rs 15000 crores was not reflected in the revised estimates and petroleum subsidy of Rs 10,000 crores was not shown either. When someone suggested to Jaitley that he should bring out a "white paper" on the status of the economy, he candidly said, "You want me the world to poke fun at us that we fudge figures !".
Modi sold hope
to the people.
Its FM's turn to deliver

The "wish list" is unending if one goes by the flood of articles splashed in newspapers and discussions on TV channels in the run up to the Union Budget. If economic experts want Budget deficit to be kept at 4.1% at any cost to avoid downgrade by world rating agencies, the ailing farmers want loan waiver in Maharashtra and elsewhere. The industry want excise duty cuts to revive the manufacturing sector destroyed during the UPA due to policy paralysis while Health, Education, Urban Development ministries want huge budgetary support to keep promises made by Modi during the election campaign and in the BJP manifesto. The gas price hike issue can't be pushed under the carpet indefinitely and Budget has to give a clue to the problem. Fortunately, the Iraq crisis is subsiding bringing the prices of Brent Crude down. Yet, the subsidies bill is on the rise. The "10 commandments" containing dos and don'ts for Jaitley by an Economist doesn't give instant solution to Jaitley's woos. The Swadeshi Jagran Manch, an RSS affiliate body functioning as watchdog, has prescribed its own medicine to revive the economy. Surely, Surely, Jaitley will lose sleep further if he is bogged down in the numbers.

Modi has suggested an out-of-box thinking and innovative ways to push growth to 6%, an ambitious target during this fiscal. Jaitley’s problem is no one has come out with a plan to generate more revenue since everybody has a wish list and nobody wants to be taxed. The middle class want super-rich to be taxed and bureaucrats want to raise the service tax to 14% from the 12% at present as 67% revenue comes from the service sector. The NDA may have set up SIT to get black money from abroad. But its a mirage because 75% of it is within the country through the P Notes route and in real estate. A couple of innovative schemes alone can give Jaitley the most sought after breather. Modi sold “hope” to the people. Its Jaitley’s turn to deliver. Its Jaitley’s tryst with destiny. Its make or break for him.  Watch out !

(The author
is National Editor
of Lokmat Group)